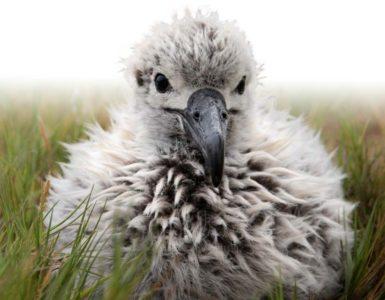 Seabird translocations to James Campbell National Wildlife Refuge:
Our goal is "no net loss" of habitat for seabirds in Hawai`i. This project seeks to match, acre for acre, land that is being lost to sea level rise in the Northwestern Hawaiian Islands. We accomplish this by creating a predator free area using fencing and then translocating or attracting birds into that area. James Campbell National Wildlife Refuge in Kahuku is our primary site for this initiative.
In 2015, we began translocating Laysan Albatross eggs from PMRF on Kauai (learn more here), hatch them in incubators and hand-feed the chicks until fledging. The goal of the project is to use unwanted albatross eggs from an aircraft runway on Kauai and start a new albatross colony on Oahu where they will be safe. In the first three years 46/50 chicks translocated fledged and in 2018, the first nest of wild adults was documented on the refuge. You can watch a small news story on the project here. In 2016 we constructed a predator proof fence for the new colony, and since 2017  we have brought 37 Black-footed Albatrosses in hopes of establishing the first main Island colony of this species. In 2018 53 Bonin Petrels and 25 Tristrams Storm Petrels were also translocated from Tern and Midway Islands to jump start this incipient colony. Partners on this project include U.S. Fish and Wildlife Service, the U.S. Navy, the National Fish and Wildlife Foundation, the Papahanaumokuakea Marine National Monument, the David and Lucile Packard Foundation and the American Bird Conservancy. More information can be found at www.islandarks.org. 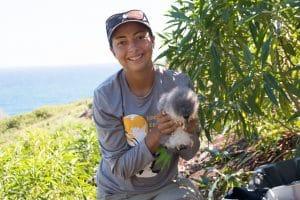 The Nihoku Ecosystem Restoration Project was created in 2012 in order to protect both rare coastal ecosystems as well as provide a predator-free nesting area for native ground-nesting birds in Hawai`i. Nihoku is an area between Crater Hill and Mokolea Point at Kilauea Point National Wildlife Refuge on the North Shore of Kaua`i. The project is a result of a large partnership between multiple government and non-profit groups who have come together to help preserve the native species of Hawaii; Pacific Rim Conservation serves as the overall project coordinator for this effort. The focus is on creating safe nesting habitat for Newell’s Shearwaters (‘A‘o) and Hawaiian Petrels (‘Ua‘u ), Hawai`i’s only two endemic seabirds, and enhancing the existing breeding colonies of Mōlī  (Laysan Albatross) and Nēnē (Hawaiian Goose) who already nest in the area. This project constructed a predator proof fence on the crater hill section of the refuge to serve as a translocation site for Newell’s Shearwaters and Hawaiian Petrels. Fence construction was completed in October 2014, predators were removed in the spring of 2015 and habitat restoration of native vegetation began soon after. In 2015, Hawaiian Petrel translocations began, and Newell's Shearwater translocations started a year later in 2016. As of 2018 114/ 116 translocated ‘A’o and ‘Ua’u have successfully fledged from this site. More information can be found at: www.nihoku.org

Ka`ena Point Ecosystem Restoration Project
We coordinated the Ka`ena Point Ecosystem Restoration Project, in which construction of the first predator proof fence in the U.S. on Oahu, Hawaii in 2011. This project was a collaboration with the Hawai`i Department of Land and Natural Resources, the U.S. Fish and Wildlife Service, Xcluder Pest-proof Fencing, and the Wildlife Society Hawai`i Chapter. Coordination involved assisting with regulatory and compliance documents, contracting and managing a public outreach campaign, development of a contract for the fencing vendor, designing and implementing a predator eradication plan, designing and implementing pre- and post-eradication biological monitoring, and facilitating regular meetings between all stakeholders. Read more about the fences in the following PDF documents: Report #83, Report #86, and Report #89
Nihoa Millerbird Translocation Project
Pacific Rim Conservation was contracted by the U.S. Fish and Wildlife Service to coordinate the Nihoa Millerbird translocation project, which created a second population of this endangered passerine on Laysan in the Northwestern Hawaiian Islands. The Millerbird formerly occurred on Laysan but was extirpated in the early 1900s when introduced rabbits destroyed all vegetation on the island. The project involved coordinating numerous partners, planning trip logistics, helping to develop translocation protocols and monitoring methods, and capturing the birds for transport from Nihoa to Laysan in September 2011. All 24 of the Millerbirds translocated survived the trip to Laysan and have been attempting to nest in their new home.