We specialize in helping to develop translocation protocols and conduct translocations of sensitive bird species- from incubation of eggs through to fledging. Our staff are experts in avian husbandry and collectively have cared for most of Hawaii’s most endangered birds during their careers. We have now translocated seven bird species as an organization- the Nihoa Millerbird, the Hawaiian Petrel, Newell’s Shearwater, Laysan and Black-footed Albatrosses, Bonin Petrel and Tristram's Storm-petrel and have plans for several more species in the coming years. With all of our translocation projects, we also use social attraction to increase the chances of wild adults colonizing the area and to ensure the chicks imprint on the correct species. If you are interested in visiting or volunteering with one of our translocation projects, please go here for more information

The goals of the No Net Loss initiative are twofold: 1) to protect as much seabird nesting habitat in the main islands as is being lost in the Northwestern Hawaiian Islands because of the effects of climate change; and 2) to establish new breeding colonies of seabird species that are safe from sea level rise and non-native predators. From 2015- 2017, we translocated 50 Laysan Albatross chicks (raised from eggs) from the Pacific Missile Range Facility on Kauai (learn more here), where albatross nest close to a runway and are an aircraft collision hazard to a predator exclusion fence at James Campbell National Wildlife Refuge on O`ahu. A total of 46 Laysan Albatross chicks successfully fledged as a result of this program, and the first chick from the 2015 cohort returned in 2018. We expect more birds to return soon and to begin nesting at JCNWR in a few years. In 2017-2018, we moved 40 Black-footed Albatross chicks from Midway and Tern Island to JCNWR, of which 36 fledged. In 2018, we moved 53 Bonin Petrel chicks and 28 Tristram’s Storm-Petrel chicks from Midway and Tern Island, with 100% survival in both species. We plan to translocate these three species for at least two more years. We combine translocation with a social attraction program involving 20 decoys of each species and solar-powered sound systems broadcasting albatross courtship calls. While no wild Black-footed Albatrosses visited the site, there were more than 300 visits by Laysan Albatrosses in 2017 and 2018.  The first wild Laysan Albatross pair nested on the refuge in December 2017, and they were joined by a second pair in 2018. Partners on this project include U.S. Fish and Wildlife Service, the U.S. Navy, the National Fish and Wildlife Foundation, Papahānaumokuākea Marine National Monument, the Wildlife Conservation Society, the David and Lucile Packard Foundation and the American Bird Conservancy.

The Nihoku Ecosystem Restoration Project was created in 2012 in order to protect both rare coastal ecosystems as well as provide a predator-free nesting area for native ground-nesting birds in Hawaii. Nihoku is an area between Crater Hill and Mōkōlea Point at Kīlauea Point National Wildlife Refuge on the North Shore of Kaua`i. The project is a result of a large partnership between multiple government and non-profit groups who have come together to help preserve the native species of Hawaii; Pacific Rim Conservation serves as the overall project coordinator for this effort. The focus is on creating safe nesting habitat for Newell’s Shearwaters (‘A‘o) and Hawaiian Petrels (‘Ua‘u ), Hawai`i’s only two endemic seabirds. This project constructed a predator proof fence on the crater hill section of the refuge in 2014 to serve as a translocation site for Newell’s Shearwaters and Hawaiian Petrels. In 2015, Hawaiian Petrel translocations began, and Newell’s Shearwater translocations started a year later in 2016. To date, 70 Hawaiian Petrels, and 44 Newell's Shearwaters have been moved via helicopter into the fenced area and were successfully reared until fledging and 112/114 (98%) of those chicks successfully fledged. The chicks are cared for daily by our staff where they are fed a daily puree of squid, fish and salmon oil. Their growth is carefully monitored and the chicks that have fledged from this program have fledged in better body condition than their wild counterparts; we expect the first Hawaiian Petrel chicks to start returning to the site as pre-breeding adults in 2019. For more information, download the Nihoku Brochure or visit www.nihoku.org.

Social attraction- Red-footed Boobies and Albatrosses
For each seabird translocation project we do, social attraction systems are implemented in order to attract wild adults to the colony, and help the chicks in returning to the site as adults. Social attraction involves broadcasting the calls of the birds and in some cases (such as for surface nesting albatrosses) putting up artificial decoys and mirrors to visually attract them. In the case of the Black-footed Albatross translocation, we tried social attraction on it's own for five years before moving to translocation to see if a colony would establish on it's own at Kaena Point. While the number of visits by wild birds increased slightly, it did not result in the birds nesting. Results of that study can be found here. At the James Campbell National Wildlife translocation site, social attraction results in nesting Wedge-tailed Shearwaters within two years, and Laysan Albatrosses nesting within three years after more than 700 visits by wild adults. 2018 marked the first year of a multi-year project aimed at determining the success of social attraction techniques and habitat management to relocate a portion of the Red-footed Booby colony at the Kaneohe Bay Range Training Facility to two areas located outside the firing area. This project was initiated by the Marine Corps Base Hawaii to reduce the impact of training activities on the nesting colony, which has shifted as the habitat has changed and now infringes on the firing range. To do this, we had 150 wooden Red-footed Booby decoys custom made by Ducktrap Woodworking. In order to mimic a natural colony, we used decoys of birds in a resting posture and other decoys of boobies in a courtship posture. The decoys and a sound system broadcasting calls of a Red-footed Booby colony were distributed between two social attraction study sites chosen in consultation with the marines. This project is being done in partnership with Oikonos Ecosystem Knowledge and the US Fish and Wildlife Service. 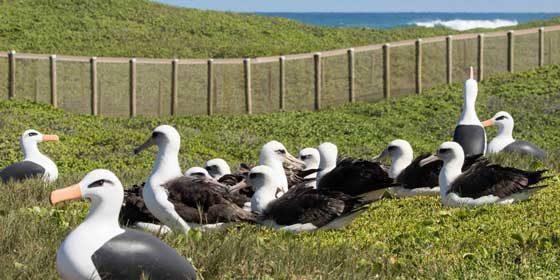 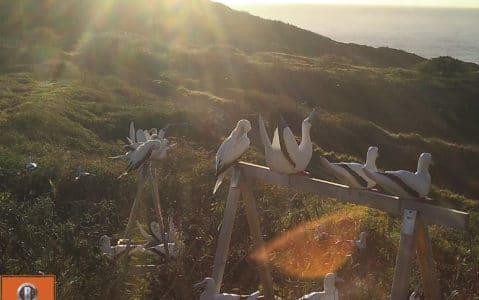 Nihoa Millerbird translocation
Pacific Rim Conservation partnered with U.S. Fish and Wildlife Service and the American Bird Conservancy to help coordinate the Nihoa Millerbird translocation project, which created a second population of this endangered passerine on Laysan in the Northwestern Hawaiian Islands. The Millerbird formerly occurred on Laysan but was extirpated in the early 1900s when introduced rabbits destroyed all vegetation on the island. The project involved coordinating numerous partners, planning trip logistics, helping to develop translocation protocols and monitoring methods, and capturing the birds for transport from Nihoa to Laysan in September 2011. All 24 of the Millerbirds translocated survived the trip to Laysan and have been attempting to nest in their new home. This project was the recipient of the 2011 U.S. Fish and Wildlife Service Endangered Species Recovery Champion Award.