We are thrilled to have been a part of a historic project more than 30 years in the making which took place on Kauaʻi’s north shore on Monday when 10, downy endangered Hawaiian Petrel chicks were flown by helicopter from their montane nesting area to a new colony protected by a predator-proof fence at Kīlauea Point National Wildlife Refuge. 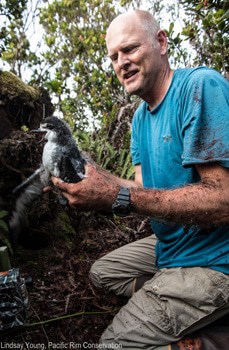 The translocation, which involved three separate teams and more than a dozen people, took place simultaneously in Kauaʻi’s rugged mountain interior and along the coast. In the early morning, two teams were dropped by helicopter onto mountain peaks located in the Hono O Na Pali Natural Area Reserve within the Na Pali-Kona Forest Reserve, state lands managed by the Division of Forestry and Wildlife. There the teams headed for 10 nest burrows that had been monitored throughout the breeding season.
Each burrow contained a large, healthy chick. The chicks were carefully removed by hand, placed into pet carriers, and hiked up to the tops of peaks where the helicopters picked them up. Like any precious cargo, the chicks’ holding boxes were seat-belted into the helicopter to ensure their safety.

“This translocation will establish a new, predator-free colony of the endangered Hawaiian Petrel to help prevent the extirpation of the species from Kauaʻi,” said Michael Mitchell, the U.S. Fish and Wildlife Service Acting Kauaʻi National Wildlife Refuge Complex Project Leader. “Petrels, like many other native Hawaiian species, are facing tremendous challenges with shrinking habitat and the onslaught of invasive species. Translocating the birds to Kīlauea Point National Wildlife Refuge ensures that this colony of birds will be protected for our children and our children’s children.” 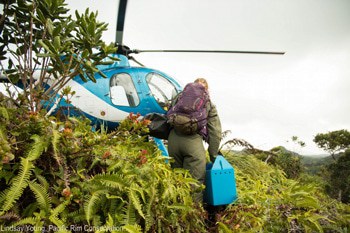 The chicks were flown to Princeville Airport where the animal care team on the ground assessed their health. From there, they were driven to the
Refuge and their new home within the recently completed predator-proof fence in the Nihoku area of the Refuge. We have been working on the Nihoku ecosystem restoration project for more than four years, and are excited to have reached this project milestone.

Endangered Hawaiian Petrels, or ʻUaʻu, are one of two seabird species endemic to the Hawaiian Islands and are found nowhere else on Earth. They have declined dramatically due to predation by introduced mammals, such as cats, rats, and pigs, and due to collisions with man-made structures during their nocturnal flights from their breeding colonies in the mountains to the ocean where they search for food. Surrounded by fine mesh stainless steel fencing, 6.5 feet high, the 7.8-acre enclosure at Nihoku protects the birds from predators; the area inside the enclosure has recently been partially restored with native vegetation. Seabird-friendly nest boxes, specifically designed to mimic natural burrows, have been installed.

“Predator-proof fencing and translocations of this type are necessary conservation strategies in Hawai’i to deal with widespread non-native predator populations that cannot be readily eradicated,” said Dr. George Wallace, Vice President of American Bird Conservancy. “For the Hawaiian Petrel, which is threatened by non-native predators in their montane nesting areas, creation of a colony protected from predators will be a major step forward in stabilizing and recovering its Kauaʻi population.” 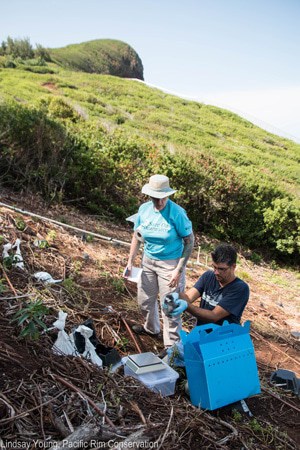 Hawaiian Petrel chicks imprint on their birth colony the first time they emerge from their burrows and see the night sky, and they will return to breed at the same colony as adults. Since chicks were removed from their natural burrows before this critical imprinting stage, they will emerge from their nest boxes and imprint on the Nihoku area, returning to the site as adults. In the meantime, human care-takers will hand-feed the young birds a slurry of fish and squid and carefully monitor their growth until they leave their new nest burrows and fly out to sea. The petrels will remain at sea for the next three to five years until they return to the same site as adults.
The new colony will be the only fully protected colony of federally-listed seabirds anywhere in the Hawaiian Islands and represents a huge achievement towards recovering this species. Adding translocations of Newell’s Shearwater will be an important next step in the project.

“We have seen a dramatic decline in the numbers of Newell’s Shearwaters on Kauaʻi in recent years, with an estimated 75 percent drop in the last 15 years,” said Dr. André Raine of Kaua‘i Endangered Seabird Recovery Project. “The establishment of new colonies of that species using predator-proof enclosures at Nihoku, and possibly other locations in the future, is an important management tool to help reverse this decline.”

“The project was made possible because all of our agencies and organizations are working together. From building the predator-proof fence to moving the birds to their new home, partnership was essential to our success,” said Mitchell.

“We are very excited to have accomplished a major recovery objective for one of Hawaiʻi’s endemic seabird species,” added Dr. Lindsay Young, the project coordinator with Pacific Rim Conservation. “What we learn on this project will be crucial to implementing what we hope will be many more projects like this on Kauaʻi and across the state.”

We will be providing updates regularly on the chick care and their growth, so be sure to check back frequently.