The first year of a three-year project targeting the establishment of a new Laysan Albatross colony on the northern coast of O‘ahu has resulted in the fledging of 10 healthy chicks.

Laysan Albatross eggs from the Pacific Missile Range Facility (PMRF) on Kaua‘i were transported to O‘ahu on December 17, 2014 and incubated at the PRC office until late January 2015. Upon hatching, the eggs were placed at Ka‘ena Point for a month with temporary foster parents, whose natural egg was infertile, so that the chicks would imprint on the correct species.

At one month of age, when albatrosses are thought to imprint on the location of their birth colony, the chicks were moved to James Campbell National Wildlife Refuge (JCNWR) on the northern coast of Oʻahu. Beginning on February 25, the chicks were fed a slurry of fish and squid by PRC’s aviculturalist, Robby Kohley. The weights and wing lengths of the chicks were measured and the diet was continually evaluated to maintain optimal weight gain and feather growth. 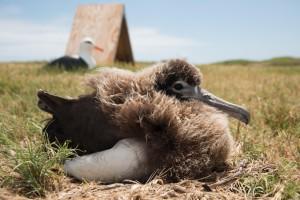 By July 1, all 10 chicks had flown out to sea where they will remain for the next three to five years until they return to land as adults.

This project was undertaken because the albatrosses at PMRF nest near an active runway, where because of their six- to seven-foot wingspan and habit of circling over the nesting area, they pose a collision hazard that puts aircraft and flight crews at risk. The Navy removes all albatross eggs and adults each year from PMRF’s air safety zone to prevent collisions with aircraft.

Adults are transported to protected albatross nesting colonies on the northern coast of Kaua‘i and released. Some eggs are placed with foster albatross parents on Kaua‘i whose natural eggs are infertile and will not hatch, but there are not enough foster parents available.

Recently, the U.S. Fish and Wildlife Service acquired a parcel of land to expand wildlife habitat at JCNWR. This new expansion provides excellent habitat for seabirds, including albatrosses, but none currently nest there. The simultaneous availability of Laysan Albatross eggs from PMRF and suitable nesting habitat at a protected wildlife refuge represents an opportunity to accomplish an important conservation action for the species and also to help solve a human-wildlife conflict.

“Albatrosses return to the same location where they were raised as chicks. By moving the chicks at that critical one-month period, they will imprint on the release site at the James Campbell refuge and return there to breed, becoming the seeds of a new colony that they will establish in the future, away from aircraft and human disturbance,” said Eric VanderWerf of Pacific Rim Conservation.

The young birds will spend their first few years at sea and are expected to begin returning to the refuge (not to PMRF) in three to five years and to start nesting on the refuge in five to eight years.

Refuge on a ‘High Island’

More than 99 percent of Laysan Albatrosses nest in the low-lying Northwestern Hawaiian Islands at the Midway Atoll and Hawaiian Islands National Wildlife Refuges, where they are threatened by sea level rise associated with climate change. Recent storm surges have wiped out thousands of albatross nests with eggs or young chicks in the Northwestern Hawaiian Islands. One of the main reasons that made James Campbell National Wildlife Refuge an attractive location to receive the eggs was that the refuge is located on a ‘high’ island within the historical nesting range of the Laysan Albatross.

“Despite some challenges encountered along the way, this project has been a resounding success in its first year,” said Lindsay Young of Pacific Rim Conservation. “We expect that we can achieve a higher hatching rate and increase the number of chicks raised over the next two years.”

“We extend a heartfelt congratulations to Pacific Rim, the U. S. Fish and Wildlife Service, and the U. S. Navy for this this groundbreaking project,” said George E. Wallace, Vice President for Oceans and Islands at American Bird Conservancy. “Together they have taken a human-wildlife conflict situation on Kauaʻi and turned it into the beginnings of a new, protected Laysan Albatross colony on Oʻahu. This is the kind of innovative conservation action that is needed in Hawaiʻi.”

In addition to raising and releasing more chicks, the next phase of the project will include construction of a predator-proof fence at JCNWR to protect the new colony from predatory non-native mammals, such as feral dogs, cats, mongooses, and rats. If you are interested in learning more about this project, or helping to fund the predator proof fence, please go https://pacificrimconservation.org/take-action/donate/